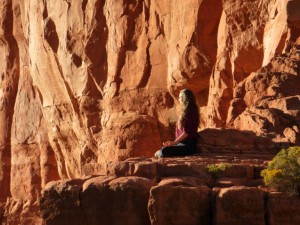 Healing sessions were offered from Airport Mesa, Boynton Canyon, Bell Rock, Chapel of the Holy Cross, and Cathedral Rock. Of all, my favorite is Cathedral Rock.

The approach to Cathedral Rock was done at night in the dark. Previous directions misguided me to an alternate trail which did not lead as expected. Driving home at glorious sunset I was struck by the setting sun illuminating a massive grouping of magnetic flaming spires. I pulled over and got out of my car, profoundly mesmerized. After a period of time, dusk called me back to the car and the highway, as I drove by a turn off I realized that the monolith that was calling me was Cathedral rock and I took the turn. And so through the universes creation, I ended up at the base of Cathedral rock, in the dark, at the bottom of a steep half hour climb in the presence of an intense call.

Unbennounced to me, my dear travel buddy had been guided to bring two headlamps that morning, and she pulled them out.

And so, the climb began. As you know, the energies of the land switch at night. Dusk is it’s own mysterious self and then the energies of the dark come out to play. So our hike at night, in a black that absorbed all but the little round spot at the landing splash of our headlamps, was filled with the power of the rock and the dancing night festivities. Three quarters of the way up, my heart started to fail. My travel bud was in terror of the intensity present, and my heart was needing to acclimate to the pressure of Cathedral Rocks consciousness. We rested. 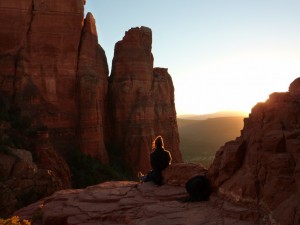 I had to go on. My inspiration and tenacity gave my friend what she needed to make it through her terror and we continued. Had either of us known what we would have been hiking in the dark we would not have gone. In day light, there are stretches that are pretty tricky in full sun light. My little light shown through just enough to see each foot and hand hold one at a time. There was a moment of rising fear when I turned my head to peak around and saw what fall lay waiting if I slipped. The truth that appeared in that moment was of trust and recognition that truly we only need to know the one very small step at hand to climb large and potentially dangerous distances. All was surrendered, I did not look again, and stayed in the present joy and focus of one movement at a time, whether hand or foot, illuminated by the small circle of white shining light from my gifted headlamp.

Nearer the top, there appeared a spot so close to the path that was so highly charged and active I almost did not pass. It was a portal that took me four days of sitting on Cathedral Rock to approach in daylight to actually sit on and participate with. At that moment in the dark, the intensity and activity there were terrifying, giving me serious doubt as to whether it was safe to pass. I continued on walking through. The spires them selves are even more powerful up close. My hearts need to acclimate made sense. The intensity and magnitude of love present in those rocks is terrifying to the heart that protects itself. Love does not hold nor protect itself. To fully be present with this rock, the heart needs to fail to hold it’s boundaries of protection. It needs to surrender. And it did. Here is an article I wrote about the healing session I was giving when that fully happened. “When the mind surrenders…” I have hiked up and down Cathedral Rock many times now, and barefoot too. Cathedral Rock will always be a sacred destination for me.

When I sat on the portal after four days of five and six hour sits from the top of Cathedral Rock, many things happened. What I will share is brief. I had never sat on portals prior to my visit to Sedona. Portals are different than vortexes. Vortexes are powerful spots of energy where much magic can happen. Portals are doorways. Sitting at this doorway was like no other. It opened to dimensions of universes, all laid out in front of me clear as day. One could go anywhere. What became clear was that I did not know myself well enough to travel through them. And so instead of diving forward into the universes of creation, I fell back into Self and Source to know myself well enough that the miniature galactic orbit of cellular consciousness knowing itself as Kristin would not get lost in the universes of Self.

Falling back into self, this is what I experienced.

I had to go back. The healing on this trip was done mostly from Cathedral Rock but sessions were done from Chapel of the Holy Cross and the ruins at Honanki. Here is Cathedral Rock at sunrise. This photo is for sale in the store. I love it and have it above my bed so I wake up every morning to a Sedona sunrise from my favorite spot.

The Honanki Ruins took me back in time and whispered ancient ways of life in harmony with the planet. The spirits whispering there showed just how extremely out of balance we are with the earth. It was way beyond even my educated view. I stood there sobbing. We are so far from the alignment of long ago. This is an invitation to listen even deeper to your heart and open to possibilities that may seem radical. I was shown the possibility of the continuation of my life in a very different expression than what it is now, and I am shifting things in my life to support that harmony. In that expression, we are not separate from the earth. Our lives are a complete co creation with her consciousness. We are cared for by her in every way. I do not have photographs of this visit. It had been unusual weather and it was an awe inspiring magical landscape of ice cycles and spraying waterfall magical mist gently towards one’s eyes and heart landing on bright green leaves of three and berries and vines encasing them all in icy mystical glass like splendor. All the photos mysteriously disappeared off my camera. My travel companion’s disappeared as well. The gifts of impermanence, magic, transformation and harmony resonate still.

You can find out more about which cookies we are using or switch them off in settings.

This website uses cookies so that we can provide you with the best user experience possible. Cookie information is stored in your browser and performs functions such as recognising you when you return to our website and helping our team to understand which sections of the website you find most interesting and useful.

Strictly Necessary Cookie should be enabled at all times so that we can save your preferences for cookie settings.

If you disable this cookie, we will not be able to save your preferences. This means that every time you visit this website you will need to enable or disable cookies again.